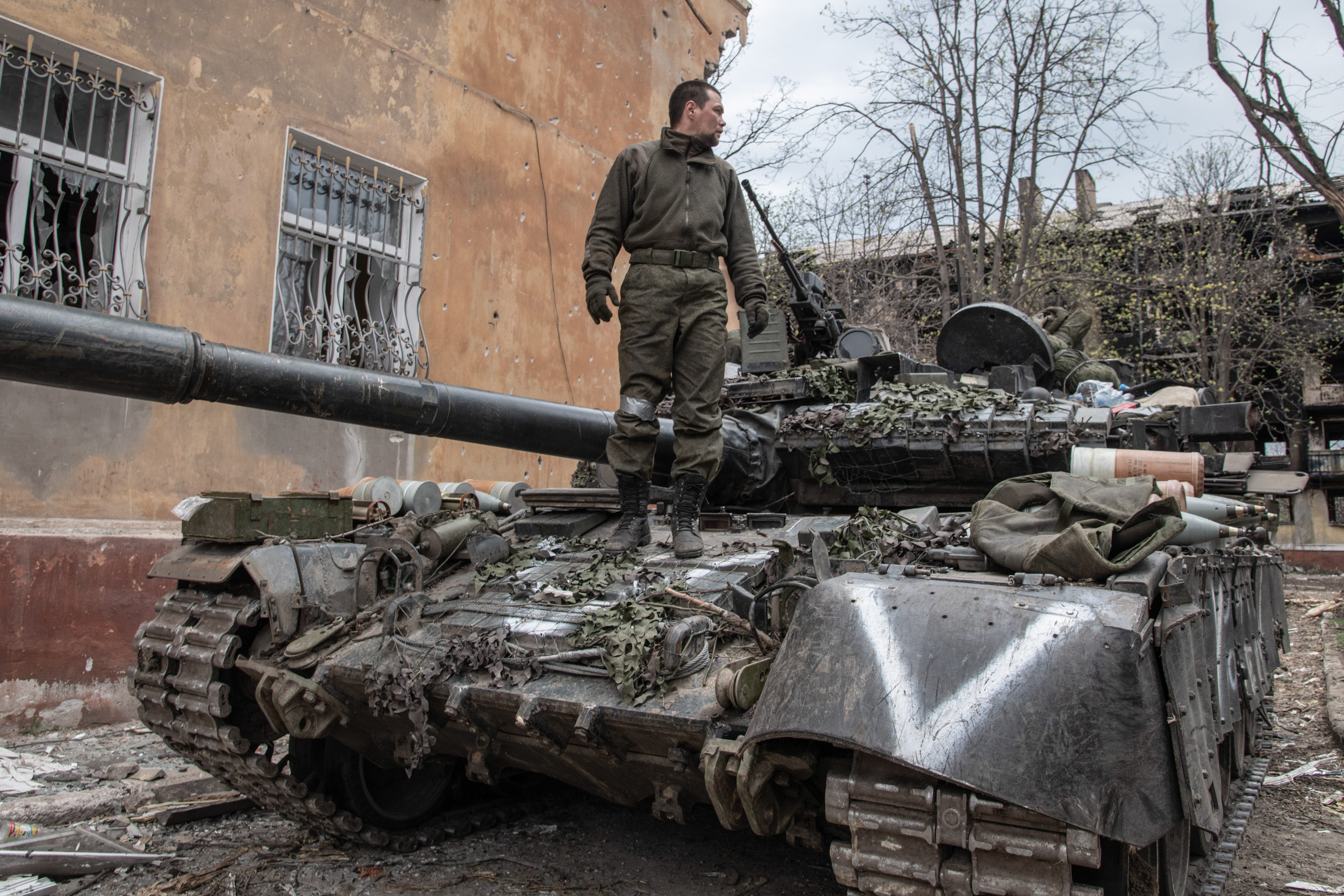 A Russian soldier stands atop hit T-80 MBT in a position close to Mariupol’s embattled Azovstal plant as his unit prepares for an assault on 18 April 2022.

A graphic video shows a Russian infantryman being shot by Ukrainian forces in the besieged port city of Mariupol.

The video, posted on Telegram by the Russian channel Military Chronicle, shows close-quarter fighting involving a squad of about ten Russian troops running to take cover in the city’s war-ravaged ruins while being targeted with rapid gunfire.

One soldier can be seen being hit by a bullet and falling to the ground. Military Chronicle said the bullet hit an artery, and the wound was fatal.

One of his fellow soldiers can be seen trying to drag his limp body away as shots continue to ring out.

A Russian armored vehicle arrives at the scene at the end of the video, presumably to support the underfire soldiers.

“At first, we did not want to publish this video – it’s hard to watch it,” Military Chronicle wrote on Telegram alongside the video.

“But it was decided, nevertheless, that these shots are also important for the chronicle since the heroism of our guys who are fighting for a dead comrade is important.”

No date for the firefight is given. While much footage recorded by drones destroying Russian armor has been published, this clip is one of the first to document frontline infantry battles.

The channel claimed that the Russian soldier was shot by the Azov Regiment, a paramilitary force within the Ukrainian National Guard.

The group has generated controversy for its ultra-nationalist ideology and has been previously accused by Russia of raping and torturing civilians in the Donbas region.

However, the regiment has been hailed for its role in defending Mariupol from invading Russian forces.

Russian President Vladimir Putin has made references to the group to justify its invasion of Ukraine as a so-called “special military operation” to “de-Nazify Ukraine.”

A Twitter user geo-located the video, and posted a comparison image of the undamaged streets before Russian attacks turned much of the site into rubble.

For two months, Russian forces have been heavily and indiscriminately bombarding Mariupol with bombs and missiles.

With a peacetime population of 440,000, the port city is of strategic value because of its proximity to Crimea, which Russia annexed in 2014. It has witnessed some of the most bitter fighting of the Russian invasion of Ukraine.

It is estimated that 1,000 civilians, mainly women, and children, alongside 2,000 troops, are trapped underground in the sprawlingAzovstal steel plant, the Ukrainian’s last stronghold in the city.

Russian forces began carrying out renewed airstrikes on the plant earlier this week and attempted to storm it.

President Putin had previously called on remaining Ukrainian forces to lay down their arms and said Russia would guarantee them “their lives and dignified treatment.”

“We’re not even considering that possibility,” Volyna said.