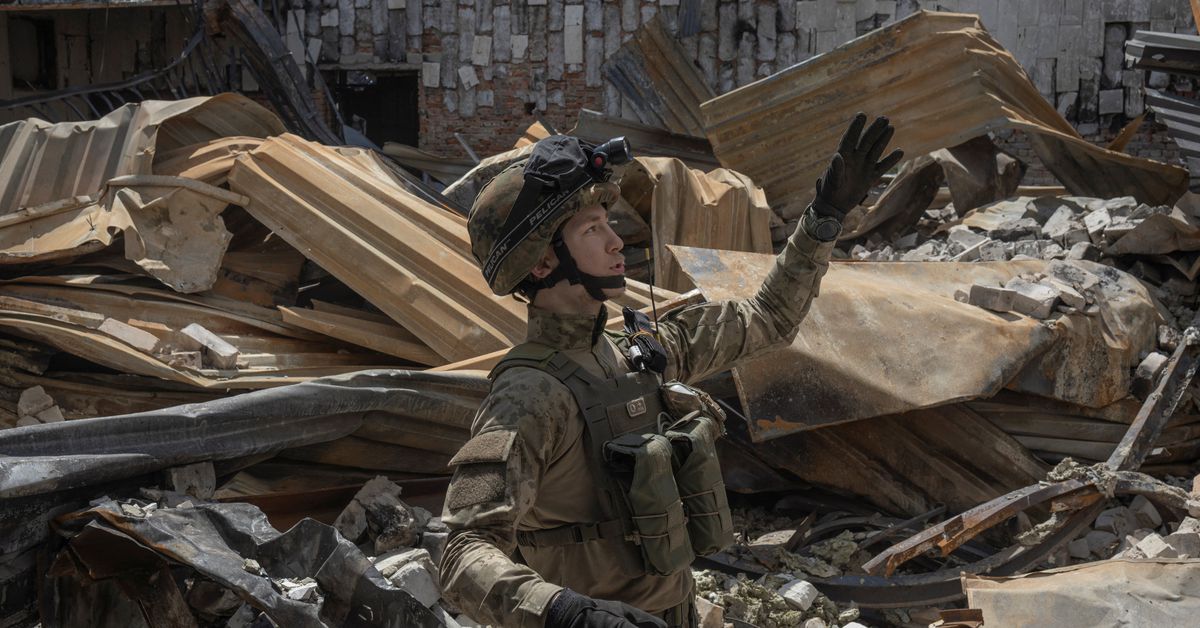 THE IZIUM FRONT, Ukraine, July 25 (Reuters) – Barely a kilometre from Russian positions defending the captured eastern city of Izium, Ukrainian and foreign fighters hunker in a dank basement. Artillery rains down on them most nights, shaking loose the plaster and filling the air with dust.

At the sharp end of efforts to stop the Russian army’s progress in eastern Ukraine are the Carpathian Sich battalion, a unit of Ukrainians and foreign nationals who answered Kyiv’s call for help to confront the invader.

“Now it’s more of an artillery war. It’s a tougher war, a scarier war, where only people who are strong in their spirit can fight,” said Dzvin, a field commander in the battalion who asked to be identified by his nom de guerre for security reasons, due to his leadership role.

The fighters say they are bound together by a fierce commitment to Ukraine that is now being put to a punishing test.

“Each of our warriors understands that at some point they will come eye to eye with a tank,” Dzvin said.

The unit recently captured one almost intact. But it must also contend with Russian drones – which the fighters refer to as “black clouds” – that help direct deadly artillery fire onto their positions.

“It is getting a lot tougher out here. The longer it goes on, it is definitely tiring,” said Conor, a British volunteer and former army medic serving on the frontline.

“They shelled at one, two and four o’clock in the morning yesterday so that’s obviously breaking our sleep routine up. But you’ve got to stay positive.”

Whether Ukrainian born or a foreigner who has answered President Volodymyr Zelenskiy’s call for help, each fighter has his own reasons for being on the frontline, aware of the risks of death, injury or capture.

“We all know the possible consequences of us being here and we’ve all made peace with that,” Dzvin said.

His battalion’s job at Izium is to prevent a Russian breakthrough that could lead to other Ukrainian units being outflanked, he said.

“It is extremely important. Our deterrence makes it impossible to create a huge encirclement of our troops.”

Another fighter, Denis Polishchuk, said he hoped that serving on the frontline would give him a worthy answer if asked by the children he still hopes to father what he had done during the war to help.

“I felt that the only dignified response would be that, yes, I was doing my part. I was fighting alongside with everyone else,” said Polishchuk, who was born in Ukraine but spent many years in Vancouver, earning him the nom de guerre “Canada”.

Conor said images of wounded women, children and fighters failing to get adequate medical help had motivated him to leave Britain for the frontline, adding that “some of the knowledge that I’ve been trained in” would prove useful.

“And we’ve helped set up field hospitals,” he said.

‘THESE ARE OUR ENEMIES’

The Carpathian Sich is one of several paramilitary nationalist groups that began as volunteers in 2014, when Moscow annexed the Black Sea peninsula of Crimea and backed pro-Russian armed separatists in Ukraine’s eastern Donbas region.

But since mid-May, the battalion’s fighters have been able to sign military contracts that entitle them to pensions and treatment at military hospitals, a move Kyiv says shows nationalist units have been reformed and successfully integrated into the regular Armed Forces.

Russia has justified its invasion by saying it wants to “denazify” Ukraine and branding some of the former paramilitary groups as far-right extremists – a charge they strongly reject.

“I’m not a Nazi, I’m a nationalist,” said Leo, 33, a new Carpathian Sich recruit who previously worked in video production in the western Ukrainian city of Lviv.

“I respect other nations… I love all people with all kind of colour skin – except Russians. These are our enemies.”