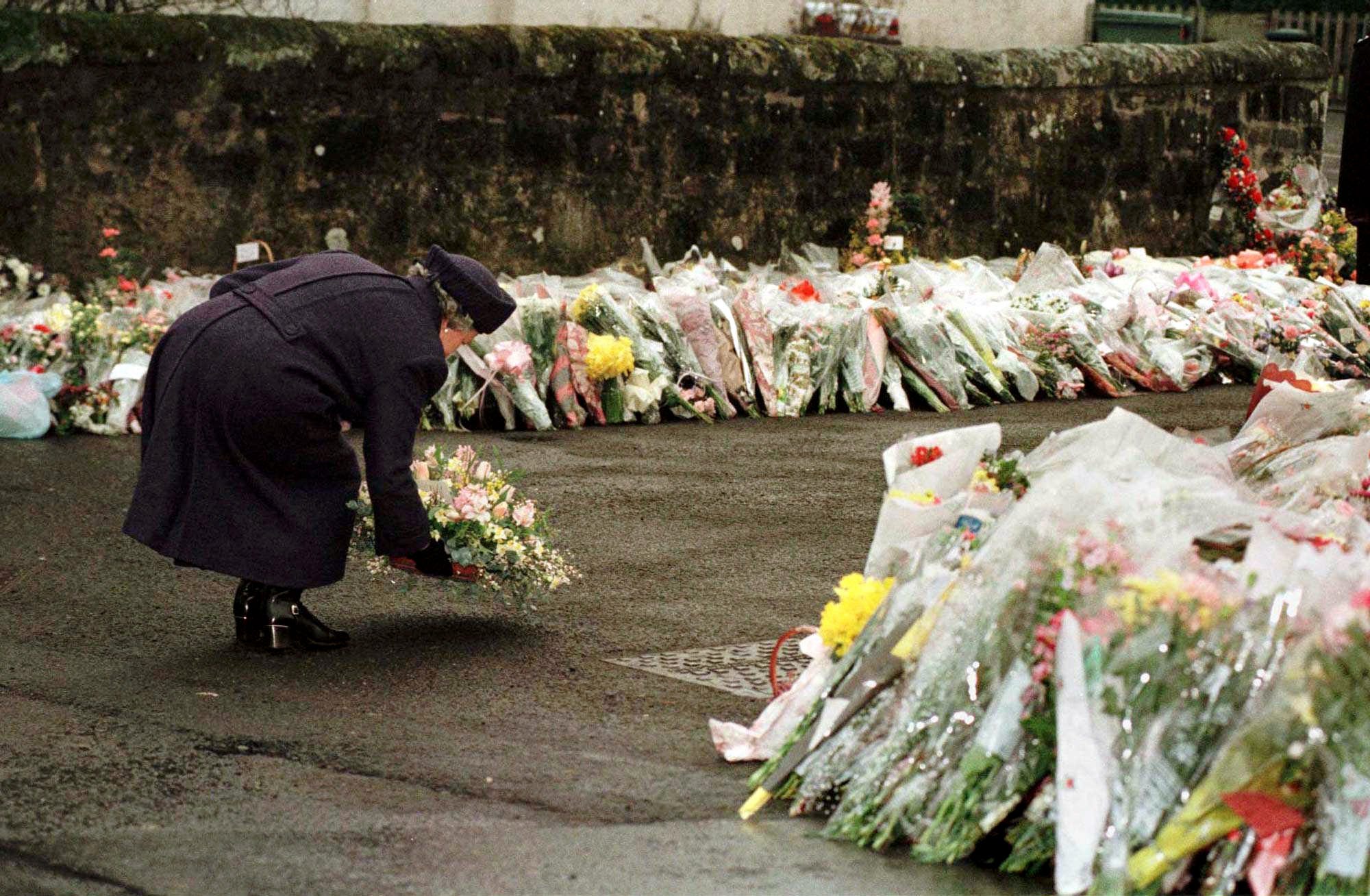 Queen Elizabeth II lays flowers at Dunblane Primary School in 1996 after the shooting there which killed 16 children and a teacher.

On the icy morning of March 13 1996, an embittered man walked into a Scottish elementary school with four handguns and 743 rounds of ammunition.

He shot dead 16 children and one teacher, and finally himself.

The event — known as the Dunblane Massacre, for the small town where it took place — put the UK in a state of shock.

It is a story that will be tragically familiar to the parents of the 19 children and two adults killed at Robb Elementary School in Uvalde, Texas, on Tuesday. 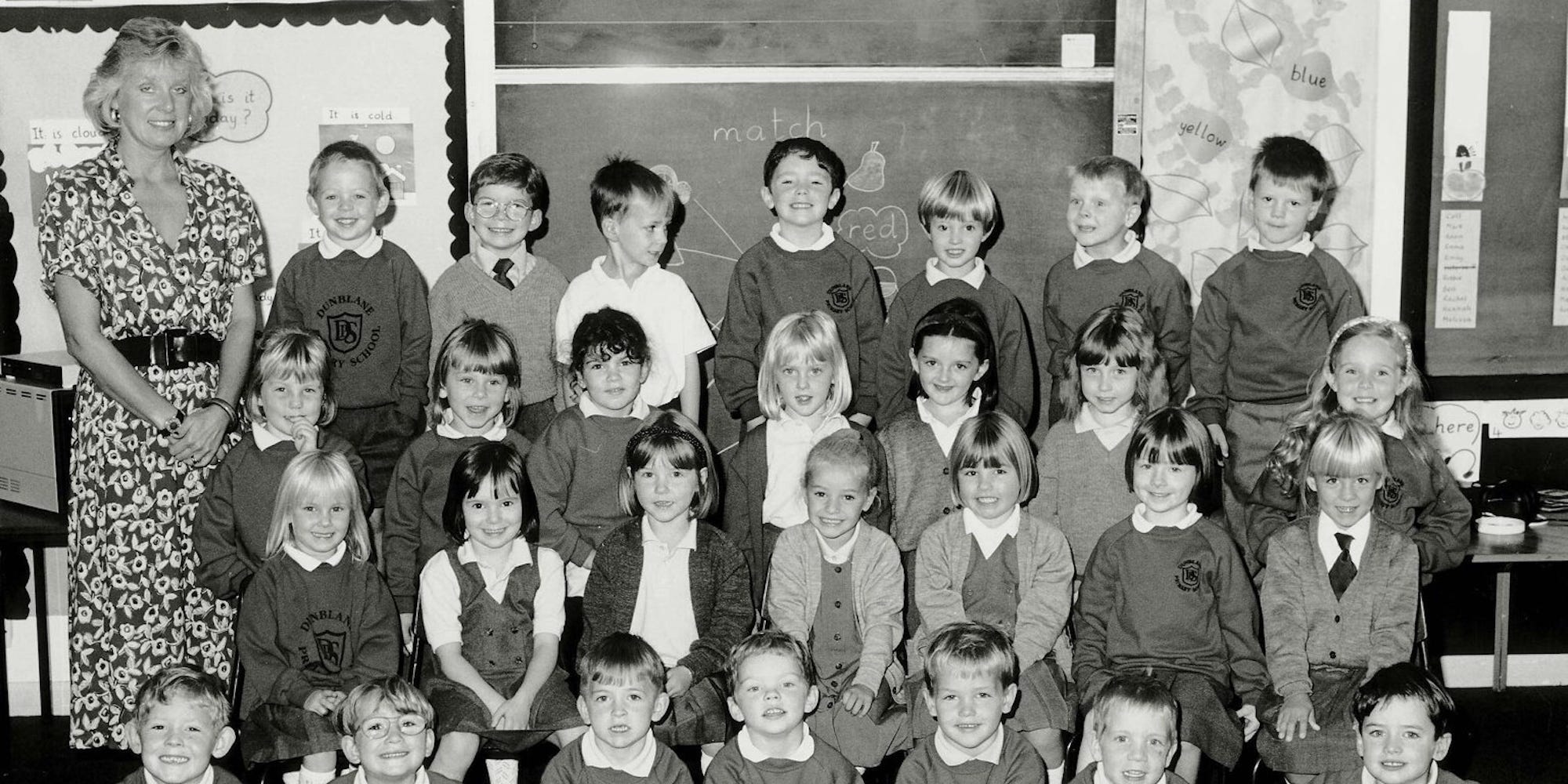 A school class portrait of the elementary school pupils and teacher that were attacked in the Dunblane Massacre in 1996.

But after Dunblane, some bereaved parents helped set in motion a change in the law that made private handguns virtually impossible to obtain in the UK. (Assault weapons like the one used in Uvalde were already out of reach.)

Gun deaths there are now vanishingly rare — in 2020, there were just 30 homicides using a gun nationwide. Mass shootings are rare; there have been just a handful in the last 35 years, none of them in schools.

Insider spoke to one of the campaigners who worked in the aftermath of that agony in Dunblane, and learned how they helped usher in strict UK gun controls.

Marshall-Andrews had long tried to energize a campaign on gun controls. In 1994, as UK police began to authorize the routine arming of some specialist officers, she felt “we were clearly going down the American road, as we always did,” she told Insider.

But she never got much traction. It took the horror of Dunblane for her work to get significant attention, and she joined three other advocates — including bereaved Dunblane father Mick North — to set up the Gun Control Network, which along with an influential petition became one of the driving forces against the UK’s gun lobby. 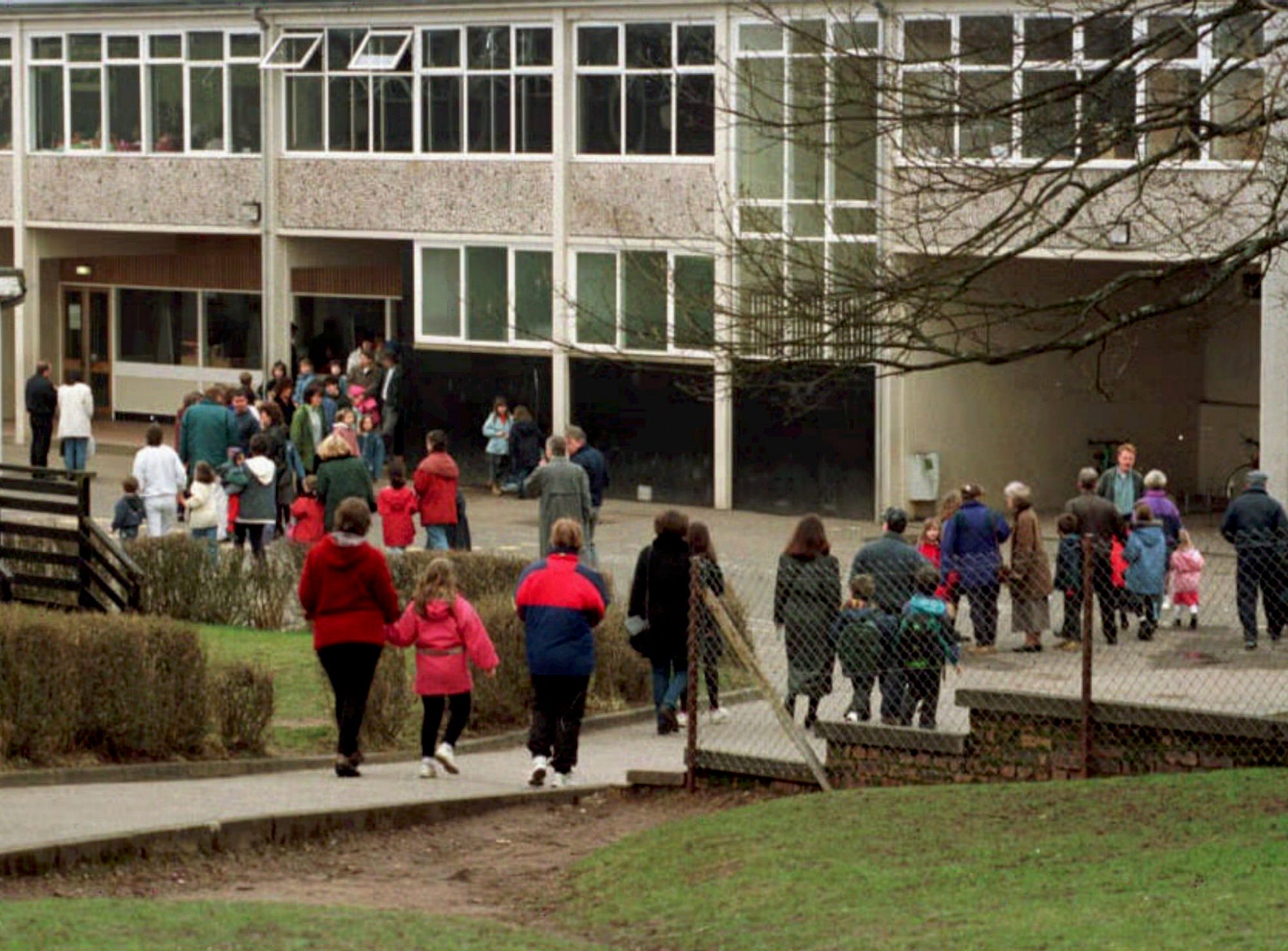 Children return to Dunblane Primary School on March 22, 1996, nine days after a gunman killed 16 children, their teacher and himself in Dunblane, Scotland

Eight days after the shooting, the then-ruling Conservative Party tasked senior judge Lord Cullen with a major public inquiry in which Cullen recommended stricter limitations, but not an outright ban on handguns.

A tightening of the law followed, outlawing high-caliber guns such as those used at Dunblane, but still allowing some handguns to be used at shooting ranges and clubs. But public sentiment for a full handgun ban was growing.

“Everywhere we turned people wanted to help us,” Marshall-Andrews said. Their campaign has no money, she said. But the — notoriously fickle — British press rallied around the issue, she said. Leading advertising agency Saatchi and Saatchi worked with the group on an influential poster campaign.

The gun lobby strikes back

The UK’s gun culture has never been nearly as pervasive, or as politically powerful, as that in the US. The UK has no written constitution, and a simple majority of lawmakers is enough to change more or less any law.

But, as Mick North wrote for The Guardian, a homegrown powerful gun lobby mounted resistance.

Marshall-Andrews said: “We were told by the shooting fraternity that there was no way we were going to get a ban on handguns because pistol shooting was the fastest-growing sport in the country at the time,” she said.

The Gun Control Network began to get death threats, she said, and even hoax bombs sent to their mailing address. Additionally, they fell victim to a sort of pre-digital trolling, whereby they began to receive sacks and sacks of junk mail, Marshall-Andrews said.

A change of government — from the Conservatives to Tony Blair’s Labour Party — did not dim enthusiasm for more change, and in November 1997 the UK enacted a full ban on the private ownership of handguns.

The power of a community

Speaking of Tuesday’s shooting in Uvalde, Texas, Marshall-Andrews said: “These horrific shootings are going to turn America into a place that people don’t want to live.”

North wrote: “The British experience proves that gun control does work, but this is a lesson Americans seem reluctant to learn.”

Marshall-Andrews recoiled at the idea of telling grieving parents what to do. But, she insisted, the families are in a position to make change.

“The parents, the families involved are powerful,” she said, recalling what the Dunblane families had achieved.

Asked about the vast political and financial heft of the NRA and the right-wing media landscape, Marshall-Andrews pointed to the fact that a majority of US citizens support some form of gun controls.

“The mantra is: Gun control works — whatever the NRA says,” she said.

She was scathing of politicians who don’t act. “They say all these platitudes, our heart goes out, and all this kind of thing, and we’re going to make sure it doesn’t happen again,” she said.

“What do you do to make sure it doesn’t happen again?”