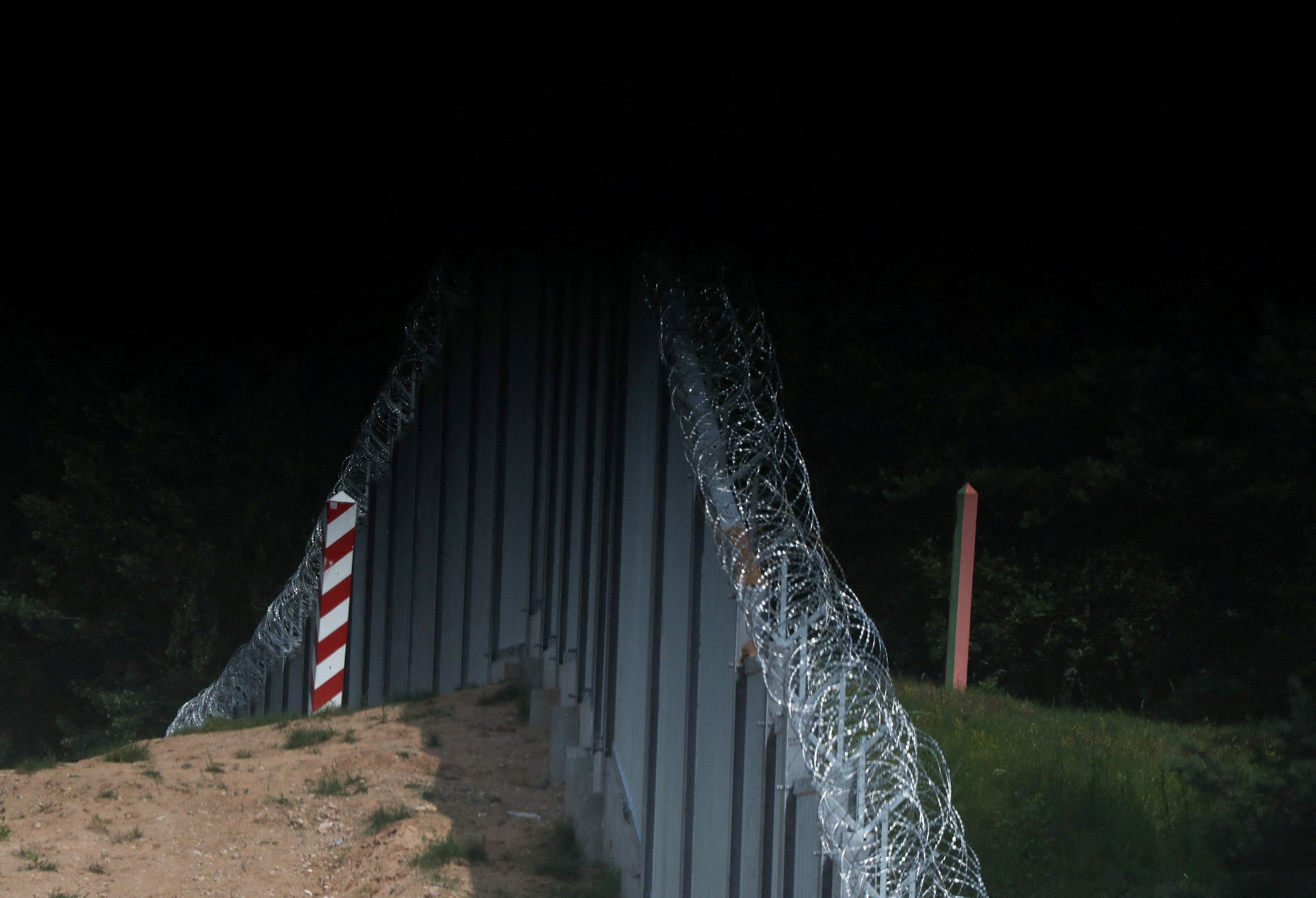 A view of the wall erected to prevent migrant-crossing on the Polish-Belarusian border amid the migrant crisis near Kuznica, Poland June 30, 2022. REUTERS/Kacper Pempel

But the wall, stretching about 187 kms (116 miles) and set to be equipped with motion sensors and cameras, may not be enough to halt the steady flow of people trying to cross into Poland in the hope of a better life.

Hungary’s nationalist government built its own border fence after the 2015 migration crisis to stem migration from Serbia. Thousands of migrants still get through, with the help of people smugglers. read more

Sitting in the attic of a so-called “safe house” only a few kms away from the Polish wall in the north, Joel and Lisa, a 30-year-old married couple from Cuba said they had climbed the barrier overnight, arriving from Russia.

“It’s very hard [to cross], but when you set your mind to something in life and you leave people behind who rely on you and your sacrifice, you must do your best,” says Lisa, whose three children stayed behind in Cuba. She declined to give her family name.

They moved to Russia on a student visa in April 2021 as they struggled to feed their family back home. They found a job in a tailor shop in the city of Ivanova but as the political situation in Russia got tense because of the war in Ukraine, they decided to take on the long journey to Spain via Belarus and Poland, to join their family members.

The couple wandered in the Polish forests for three days, before a local woman helped them find a place where they could rest for a few days. Lisa’s feet are still swollen from all the walking.

According to Grupa Granica, a coalition of non-governmental organisations and local activists who have been helping people hiding in Poland’s woodlands, the wall has not stopped people from attempting to enter Poland.

“It all depends on the weather. Now, when it’s hot, we receive a lot of calls,” says Paulina Bownik, a doctor from Bielsk Podlaski, who, since last August, has provided medical help to over 300 people. “We have people in the woods all the time.”

Poland started building its steel border barrier in January after nearly 40,000 people, mostly from the Middle East and Afghanistan, tried to cross from Belarus between August and January.

The Polish government also imposed an emergency zone near the border that neither doctors nor NGOs could enter and began a campaign of pushing migrants back to Belarus. Critics say this sparked a humanitarian catastrophe, but Poland insists the measures were necessary in response to what it called Belarus’ provocations.

It completed the wall last month but according to local activists, people still go over, under or through it with the help of no or only basic tools.

Between June 16 and 22, Grupa Granica received 132 calls for help from migrants wandering the woodlands.

What has changed, however, is that most migrants use Russia to get to Europe, unlike last year when the majority came from the Middle East via Belarus, the Polish border guard said.

“Virtually all people who are now trying to cross the border illegally come from Russia, their journey was through Moscow. These are people who often got a student visa, although they had no intention of studying in Moscow,” said Anna Michalska, a spokeswoman for the Polish border guard. She said there were a lot of Sub-Saharan African nationals this year.

This year, the border guard recorded 5,859 attempts to illegally enter Poland from Belarus, compared with 39,269 between August and December 2021.

Some migrants end up in guarded or open migrant centres, while those who do not want to apply for international protection in Poland, are “informed about the obligation to leave the territory of Poland and returned to the border line”, the border guard told Reuters in an emailed reply.