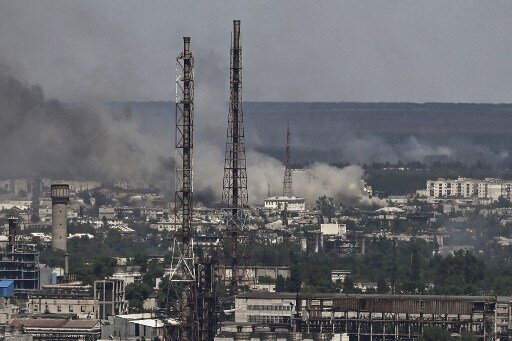 A statement on the same day from Britain’s Defense Ministry (MoD) said that over the past 24 hours RF forces had gained control over roughly half the city, at some locations recovering ground that had been lost to Ukraine Armed Forces (UAF) counterattacks earlier this week.

Oleksandr Motuzyanyk, a Ukraine Defense Ministry spokesman, told the UKRINFORM news agency on June 10 that the UAF was holding its positions in Severodonetsk and that RF attacks were currently limited and local in nature. He likewise predicted RF forces would not be able to force UAF fighters from the city.

On Friday, June 10 the Kremlin-affiliated news feed Readovka offered an opposite view of the situation around Severodonetsk, stating RF forces were pushing ahead inside the city and advancing towards the villages of Vrubovka and Hirska in a successful outflanking maneuver.

RF forces bypassing Severodonetsk will soon reach the Lysychansk-Bakhmut road and UAF units to the east will soon be cut off, the agency’s daily situation estimate predicted.

RF and UAF forces have battled for almost a month for control of the T-1302 road, on which UAF forces to the north and east, including in Severodonetsk, depend for supplies.

Serhiy Haidai, head of the Luhansk regional defense administration, in a June 10 YouTube public information message said RF artillery was firing at Severodonetsk and adjacent villages with the goal of “flattening everything.”

UAF defenses were holding against superior numbers and forces but, due to heavy RF artillery fires evacuation of civilians was not possible, he said.

“They (RF units) have not taken the city (Severodonetsk)…there is street fighting,” he said. “But the Ukrainian army has stopped them for four months.” The UAF controls the T-1302 highway and is moving supply convoys along it, but RF artillery is able to hit the road, Haidai said.

Motuzyanyk said that the RF army leadership is currently searching for weak points in the Ukrainian defensive lines and trying to reposition troops to exploit gaps, particularly unguarded crossing sites on the Siviersky Donets River, a waterway cutting through the Donbas sector, and dividing Severodonetsk from the neighboring city of Lysychansk.

“As of now, they (RF units) are looking for weaknesses in our defense…which runs along the right bank of the Siviersky Donets River, (they are) looking for (UAF) artillery positions and trying to suppress them…. Forcing a water obstacle is a very difficult operation, but the enemy has not given up trying to find a way do that,” Motuzyanyk said.