The slickly produced video opens with an unlikely scenario. The year is 2023. Sviatlana Tsikhanouskaya is the president of Belarus. And Belarus has been invited to join the European Union.

“Fantasy? Not at all. The war Vladimir Putin started against Ukraine gives us a unique chance to change history,” the narrator says. “Russia is already losing. And without our bases, railways, and borders, Putin’s defeat will be significantly hastened.”

The video calls on Belarusians not only to demonstrate against the war, but also to deny Russia the assets they need to prosecute it from Belarusian territory. “Blockade the aggressor at bases and supply routes. Deny them food, fuel, and freedom of movement,” it says.

In fact, this is more than a call for action. It is actually describing something that is already happening. Since Putin’s Ukraine War began on February 24, at least 52 Belarusians including 30 railway workers have been arrested on charges of treason, terrorism and espionage for disrupting the movement of Russian troops and military hardware, according to the Belarusian human rights group Viasna.

Alyaksandr Lukashenka’s autocratic regime in Minsk is so concerned with what has become known as “The Rail War” that it has also declared the Telegram channel of the “Association of Railway Workers of Belarus” an extremist organization.

Receive updates for events, news, and publications on Belarus from the Atlantic Council.

This railway rebellion is the most dramatic example of how Putin’s war against Ukraine is changing the political dynamic in Belarus. Lukashenka’s slavish submission to Putin, allowing the Kremlin leader to use his country as a staging ground for Russia’s assault on Ukraine, has unnerved and angered this nation of 9.4 million people.

Belarusians are deeply averse to war, have long had warm feelings toward Ukrainians and, like much of the world, are disturbed by atrocities like the mass executions of civilians in the Kyiv suburb of Bucha.

Lukashenka’s enabling of Putin’s aggression has also subjected Belarus to Western sanctions which are battering its already fragile economy and causing living standards to plummet. Moreover, the poor performance of the Russian armed forces and Lukashenka’s erratic and inconsistent statements about whether or not Belarusian troops would join the offensive are undermining the dictator’s carefully curated image as a strong leader.

Writing in The Guardian, Belarusian journalist and television host Sasha Filipenko noted that for decades Lukashenka has repeated the same mantra to Belarusians: “While I am your president, there will be no war in Belarus.” In a country that throughout its entire history has frequently suffered as a result of someone else’s conflicts, this promise previously proved persuasive. However, commented Filipenko, Lukashenka’s obligations to Putin have now turned Belarus into an aggressor, leaving his own people completely bewildered.

In addition to the railway rebellion, a Belarusian hacking collective called the Cyber Partisans has been attacking the country’s railway network in an effort to prevent Russian troops from reaching Ukraine. The group has also distributed videos urging Belarusian soldiers not to take part in Russia’s war.

Meanwhile, hundreds of Belarusian volunteers have joined Ukraine’s struggle to defend itself against Russia by signing up for a paramilitary group called the Kastus Kalinouski Battalion, named after the nineteenth century Belarusian leader of an uprising against the Russian Empire.

Russia’s invasion of Ukraine is a paradigm-shifting event in more ways than many observers initially imagined. It has united NATO, ended the Nord Stream 2 pipeline project, caused Europe to retreat from its dependence on Russian energy, and led Germany to dramatically increase defense spending. All of these things seemed unimaginable just a few months ago.

And in the former Soviet space, unexpected ripple effects are only beginning to appear. As we entered 2022, the centenary of the founding of the Soviet Union, it seemed that Putin was well on his way to reestablishing part of the old empire. He had pulled off a soft annexation of Belarus without firing a shot and appeared poised to seize Ukraine by force.

Putin’s war has not gone according to plan thanks to a combination of fierce Ukrainian defense of their homeland, the incompetence of the Russian military, and surprisingly strong Western unity. Against all odds, Ukraine is fighting Putin’s war machine to a standstill. And the even more surprising resistance within Belarus might yet free that country from the grip of the Kremlin and its quisling client Lukashenka.

If the sheer brutality of the Russian atrocities in Bucha has shown the world the human cost of defeat, the brave resistance of Ukrainians and Belarusians demonstrate what is possible in the event of victory. The United States and its allies now need to impose even tougher sanctions, including a complete embargo of Russian energy exports to Europe, and give the Ukrainians all the weapons and support they need to defend themselves. Too much is at stake to do anything less.

Brian Whitmore is a nonresident senior fellow at the Atlantic Council’s Eurasia Center, an Assistant Professor of Practice at the University of Texas at Arlington, and host of The Power Vertical Podcast. 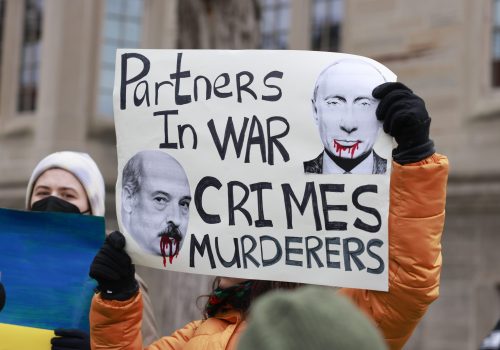 
Vladimir Putin is pushing Belarus dictator Alyaksandr Lukashenka to join the invasion of Ukraine, but the war is deeply unpopular among Belarusians who fear direct participation will have catastrophic consequences. 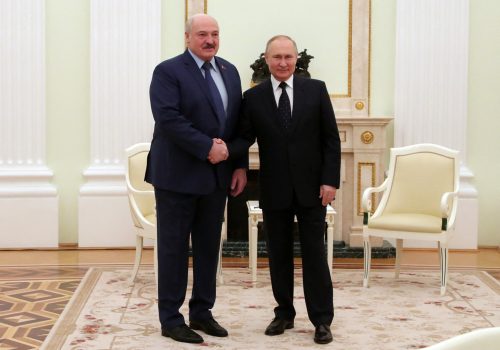 
Belarus dictator Alyaksandr Lukashenka is coming under increasing pressure to join Vladimir Putin’s Ukraine War but there is no guarantee that unenthusiastic Belarusian troops will follow orders to invade. 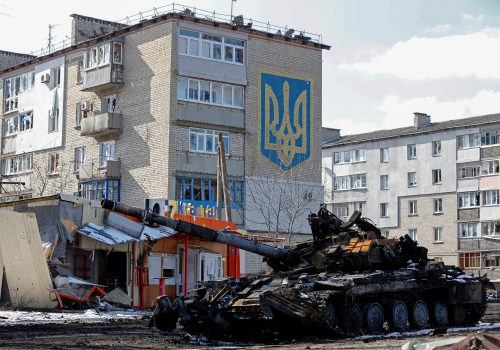 
The fierce Ukrainian resistance to Russia’s invasion is getting inside the heads of Belarusian military leaders and causing them to question the wisdom of joining Vladimir Putin’s war.

The views expressed in UkraineAlert are solely those of the authors and do not necessarily reflect the views of the Atlantic Council, its staff, or its supporters.

UkraineAlert is a comprehensive online publication that provides regular news and analysis on developments in Ukraine’s politics, economy, civil society, and culture.

The Eurasia Center’s mission is to enhance transatlantic cooperation in promoting stability, democratic values and prosperity in Eurasia, from Eastern Europe and Turkey in the West to the Caucasus, Russia and Central Asia in the East.

Follow us on social media
and support our work