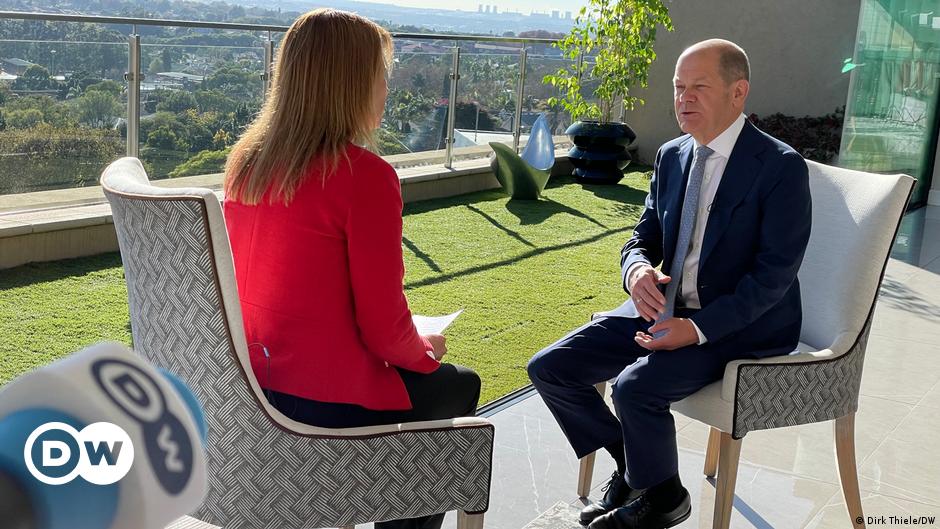 German Chancellor Olaf Scholz emphasized that bringing an end to Russia’s war in Ukraine “would be the best for the whole globe,” in an exclusive interview with DW on Tuesday in the South African city of Johannesburg.

Speaking with DW’s chief political editor, Michaela Küfner, Scholz said the EU and the US were leading an initiative to lower fuel prices around the world — by urging countries to increase their production of oil and gas.

The comments came during Scholz’s first official visit to Africa, where he discussed the wide-ranging impacts of the war in Ukraine with African leaders.

Scholz says Russians are already ‘suffering’ because of the war

During direct talks with Putin, Scholz said he told the leader that the war “will never have a good outcome” for Russia. He also added that the international sanctions were hitting Russia’s economic development hard and would have lasting effects.

“They will go back in their opportunities of economic development for decades, they will suffer and they are suffering, and for getting out of this, [Putin] has to stop the war,” he added.

With the war in Ukraine and sanctions on Russian energy imports contributing to a spike in global fuel prices, Scholz confirmed that the US and EU are working together to lower costs.

“We will have a very difficult situation if we look at fuel prices. Obviously this will be not feasible to subsidize them down, and even not on a global level,” Scholz said, but added that “it is necessary that we start to increase the supply” of fuel.

“We are now discussing with all these countries that are exploring oil and gas and trying to convince them to increase their capacities, so this would help the world market,” the chancellor added.

Berlin should work ‘intensely’ on diplomatic ties with Africa

Scholz said it was vital for Russia to end its war in Ukraine not only for European security, but also for global peace.

“It is obvious that a lot of countries are suffering from this war and from the Russian aggression, and this is why we are very decided that we will help the countries that are suffering,” he said.

Germany is working to support the UN’s World Food Programme to address grain shortages that are hitting countries in Africa particularly hard.

He added that European countries in particular have a responsibility to improve relations and support to formerly colonized countries.

“Germany [and] all countries with a colonial past have to be very honest and admit that this past is part of their history and that they have responsibility for better relations with the countries, for instance in Africa. And doing this is also the basis for a good relationship in the future,” he said.

Addressing the colonial past and working to deepen cooperation “is the basis for a multilateral world” that consists of “countries that cooperate for a better future,” according to the German leader.

During his first official visit to the African continent, Scholz has met with leaders in Senegal, spoke with German troops in Niger and is now in South Africa for the next stage of his journey.