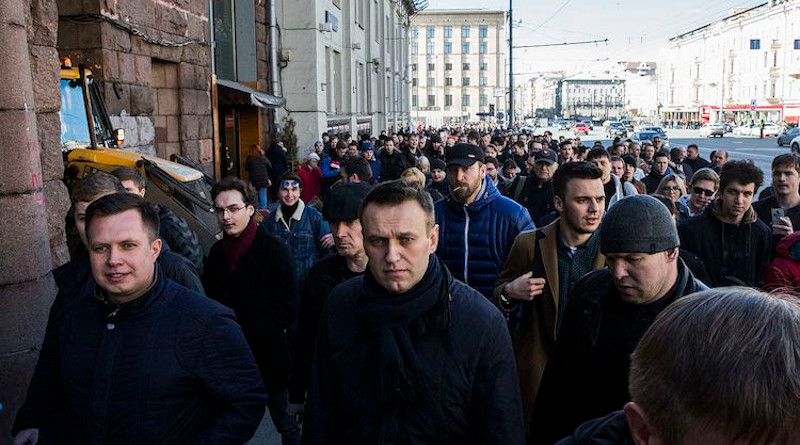 The Russian opposition is celebrating how many people came into the streets in support of Aleksey Navalny last Saturday, but those events and the upcoming Duma elections highlight the fact that if the opposition is to be successful, it must do more homework on three important issues, Pavel Luzin says.

The Perm political scientist says that the first task of the opposition is to come up with a clear and understandable program that will draw people to it and to recognize that it must act politically rather than emotionally in that regard. Last Saturday’s protests were in the wrong as far as that is concerned (region.expert/russia21/).

On the one hand, they allowed a population tired of the pandemic to let off steam rather than promoted a clearly defined program. And on the other, Luzin notes, they took place in the wrong locations. The protests should not have been in the main squares but in front of the government buildings whose denizens opposition leaders want to challenge.

Coming up with such a program is not easy, but it is a piece of homework the opposition cannot ignore if it wants to be successful in the Duma elections.

Second, if the opposition is to be successful electorally, it must address a group of voters that the powers that be have generally ignored, the roughly one in four Russians who between 2011 and 2019 have moved from one place in the Russian Federation to another, mostly from smaller settlements to larger ones and from east to west.

This trend, amounting to some four million people a year, is likely to accelerate once the pandemic restrictions are lifted and business activity increases. And the opposition needs to recognize because the powers that be haven’t, that such people will behave differently than longtime residents of the places to which they move.

They need to find a political voice; and the opposition, if it wants to be successful, needs to provide one to them by speaking to their specific concerns rather than just acting as if they are simply part of the communities into which they have moved. (On the numbers involved, see rosstat.gov.ru/folder/12781.)

And the third piece of homework the opposition needs to engage in, Luzin argues, is to focus on something it currently tends to ignore. The regime’s United Russia Party may dominate the scene and monopolize politics but it is not “a monolith.” Instead, it includes a wide swath of views and people.

What does that mean? It means, the Perm political scientist says, that the opposition must use intelligent voting to support those even within United Russia who are open to the positions the opposition hopes to advance rather than ignoring such people just because they are currently part of the ruling party.

If the opposition plays its cards right, he suggests, it may be able to keep them as part of the ruling party but one that the opposition forms rather than one that the Kremlin has constructed. The opposition must recognize that party membership in Russia today “plays a more symbolic than programmatic function.”

All three of these changes will require a great deal of work, and they should begin in the cities and regions where the need for a common political agenda also exists but where it is very much possible to bring into political life “those who today are not prepared for active protest.” If the opposition does its homework, it has a good chance to make progress.