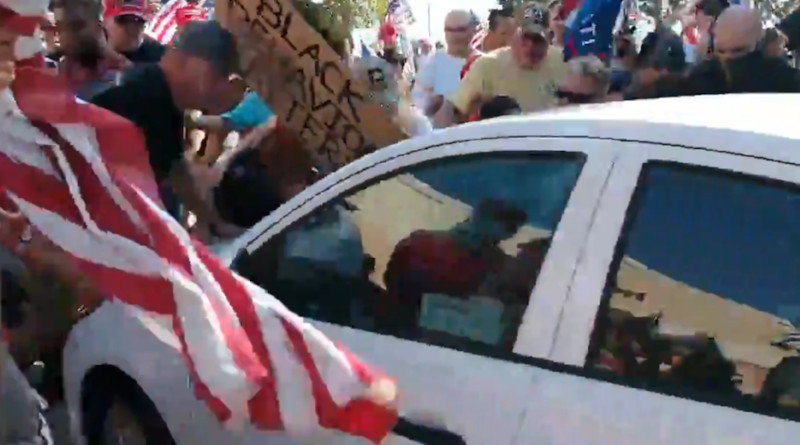 A video has captured the moment a car pushes through a crowd of apparent supporters of US President Donald Trump in Yorba Linda, California after they reportedly squared off with Black Lives Matter protesters.

Footage of the incident, that took place on Saturday afternoon in Yorba Linda, a suburban city in northeastern Orange County, shows a white car driving through a group of people, some of them carrying American flags and pro-Trump banners.

Before the car starts off, a man, who can be seen wearing an American flag as a mask and a black hat, appears to be taking photos of the vehicle, while standing right in front of it.

The activists attempted to chase after the sedan, but were stopped by police, which were present en masse at the scene in anticipation of potential fracas between the rival groups.

Officers can been seen pulling the vehicle over in the video.

Local media reported, citing police, that the female driver of the vehicle was taken into custody. It’s unclear if she is facing any charges.

Several people have been injured in the runover, including a middle-aged man, who was seen bleeding from his knee. It appeared that his ankle was broken.

The incident unfolded in the parking lot of the city library, reportedly after pro-Trump counterprotesters crossed over from the other side of the road and engaged BLM supporters.